Have Wisdom to get rid of Wisdom Teeth 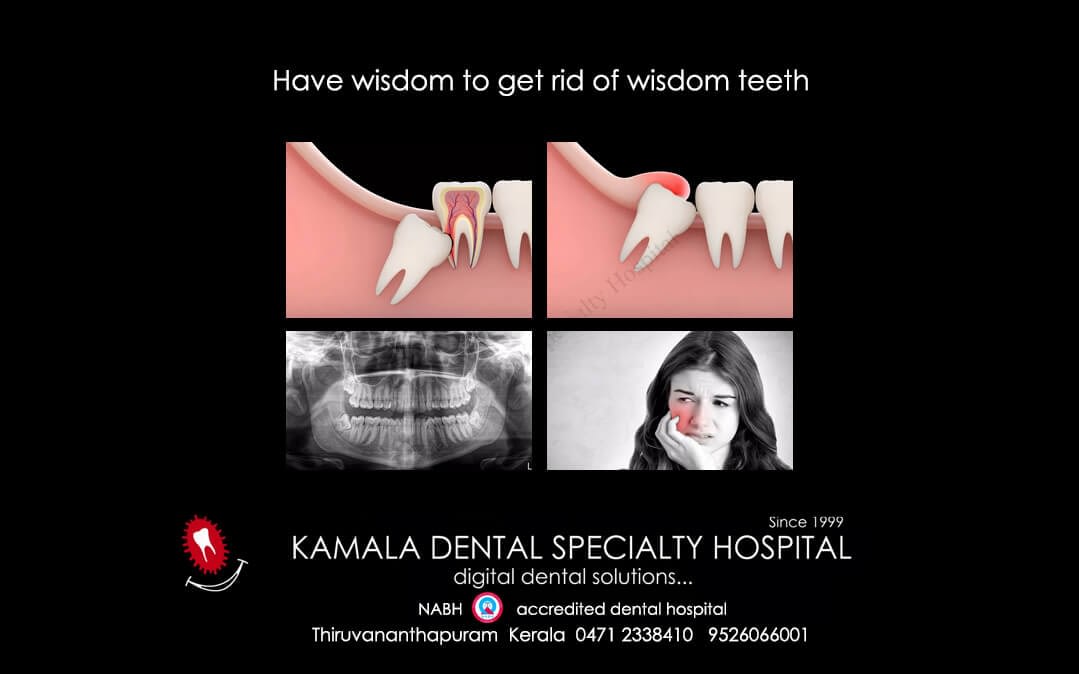 Wisdom teeth or the third molars are the last teeth to appear in the mouth. They erupt mostly between 17 to 25 years of age. They are called so because they erupt into the mouth during the age where a person steps into adulthood and supposedly turns wiser.

Wisdom teeth were important in early humans as their diet was coarse and raw. This led to wear and tear resulting in loss of molars that erupted earlier in life. Wisdom teeth would then help in preserving the chewing capacity. But as diets became more refined, the jaw sizes became smaller with lesser space for teeth to erupt in adulthood. The need for such teeth has also diminished because of the change in human diet.

When a tooth does not emerge out into the mouth to a functional position, within the expected time of eruption, it is termed as an impacted tooth. Such a tooth can be blocked at various positions of eruption eventually leading to different degrees of impaction. Teeth can be impacted mainly due to lack of space in the jaw and gets stuck in the jaw at different awkward positions. Apart from wisdom teeth, other teeth such as canines can also be impacted.

If the wisdom teeth emerge out completely to a proper functional position and if the surrounding areas are accessible to cleansing, they seldom cause problems. But, if the wisdom teeth are impacted with only partial eruption they can cause several problems such as:

Removal is indicated when wisdom teeth don’t come out through the gum completely and cause recurrent episodes of pericoronitis. It is also advisable to remove wisdom teeth at the earliest sign of dental decay, especially in teeth that erupt at an angle. These teeth are difficult to restore or fill due to difficulty in access to such teeth.

Surgeries for wisdom teeth removal are usually done under local anesthesia, which works really well in controlling pain. The time taken for the procedure depends on the individual tooth and the position such teeth are impacted in.

People who are very anxious and are afraid to get the procedure done under local anesthesia have the option of getting it done under sedation or under general anesthesia very comfortably.

Most people will suffer mild to moderate swelling on the face, some post-operative discomfort and restricted mouth opening, difficulty in eating food, all of which can last for 4-5 days. There is no restriction on performing regular day to day activities.

Do you worry more about bad breath and bleeding gums? It might be an early sign of a gum disease. Gum diseases are more common nowadays affecting almost 50% of the population. As age advances, the symptoms can get worse, affecting the overall dental health including...

WHY YOU NEED A DENTAL CHECKUP EVERY SIX MONTHS?

Have you scheduled an appointment with your dentist? NO? If not, you should and here are the reasons. If you are determined to keep good health, then you must get your oral health too checked. As the mouth remains the first entity where any systemic deterioration...